Today I am delighted to introduce Monique McDonell, another author I have had the pleasure of meeting through the Romance Writers of Australia. 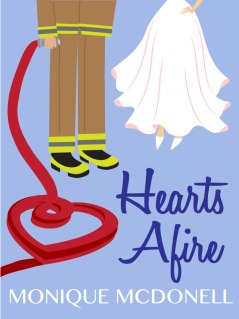 Monique writes charming, cheering chick-lit and contemporary romance and is currently celebrating the release of her second novel, Hearts Afire.

Hearts Afire contains, apparently, a jilted bride, a sexy fireman, a tropical island, a fear of the ocean, a fear of commitment, a new neighbour, an old flame and a secret identity – which sounds like excellent value for money! 😉  I haven’t read this one yet (it’s on the Kindle TBR pile) but I did read her first one, Mr Right and other Mongrels and liked it a lot.  It’s perfect curl-up-on-the-couch or take-to-the-beach reading; characters you like, situations you can identify with and just enough trouble to make it fun.  I like a gritty crime novel as much as the next person, but sometimes it’s nice to forget about man’s inhumanity to man and escape into a story.  Monique’s books are great for that.

But this post is not just about the contents of her books, lovely though they are.  Monique has produced both of these titles herself and as a newly published author (with a traditional publisher, although a new digital imprint of that publisher), I’m very interested in the process of self-publishing.  I thought you might be interested too and since she’s a lovely person, Monique was kind enough to answer my questions.  So here we go; interview time!

Hello Monique and welcome to Wine Women and Wordplay.

Thank you for having me.

Q. You have been writing seriously for a while now and I see that you have done very well in competitions, including one run by a major publisher.  Yet you have chosen to self-publish both your novels to date.  Can you talk a bit about why you chose this way of getting your book to your readers? 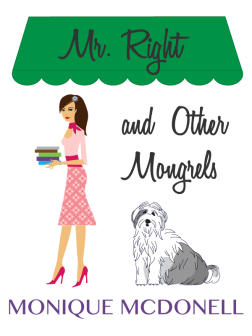 Before I answer this question specifically about my work I think it’s important to realise that even since May when I published Mr Right and Other Mongrels the publishing landscape in Australia has changed. As you know, there have been so many new opportunities arise especially in e-publishing with local publishers really expanding in this area but that wasn’t the case a year ago and certainly not two years ago.

I started trying to get Mr Right and Other Mongrels published at a tricky time in the industry and add to that the fact it was chick lit and the popularity of that genre, at least as far as publishers were concerned, was flagging. I felt like it wasn’t going to get picked up by traditional publishing even though I had lots of positive feedback from various publishers so I decided to do it myself. I was so near but so far away and I decided for me personally taking control of the situation was a good idea.

I did an awful lot of research before I started and it seemed to me that books that were e-published online by their authors often did as well, or better,  as those published by smaller overseas e-publishers which was the route I could have pursued. Add to that the fact that I am by nature a bit of a control freak so in doing it myself I got to choose the cover and I have a bit more control over other aspects of the book such as price and where it is sold. Once the first book was up it seemed logical to follow it with the second and in the e-publishing space it seems to be the more books on the shelf the better you do.

I still have other books that I am sending to traditional publishers.

Q. There is more to publishing a book than writing the story.  What services do you outsource (editing, design, etc) and how did you find the people that you use?

Absolutely, writing the story is the easy bit as far as I’m concerned. I’ve outsourced quite  a few things because you do completely lose perspective about your own work. I have outsourced the edit on both books. the cover design and the layout on the paperback and then lay out on the e-version of Hearts Afire. I did the e-version of Mr Right and Other Mongrels myself and I probably will do that again in the future – I was behind schedule with the release of Hearts Afire and I felt someone else would be faster than I would, plus I was a bit flustered and that’s when you make mistakes. I have had my covers professionally designed as well.

I knew an editor so that was okay. I think the best thing you can do is ask people who they used. That’s how I got my formatting done. I asked an author I knew who she used and took her advice. Look at people whose work you admire and go to them.

Q. I love your cover art and the fact that you’ve used the same style for your website.  Do you think this ‘branding’ of your style is working for you as a promotional tool?  How scary was it choosing something that was going to represent you visually across a number of books?

I have a background in public relations and I think this really had a big impact on how I went about the ‘branding’ of my books and myself. I spent a lot of time in bookshops and online looking at how publishing houses had branded their authors and I asked friends to tell me what they liked about various covers and what drew them to certain books. For example the majority of people I asked said they prefer illustrations to photos on covers and I took that on board.

I talked with Lisa, the designer, about how I wanted the books to look similar before we started so we both on the same page. My books are light and fun and have a bit of humour in them so I wanted that energy to come across.

Here is an interview I did with my designer Lisa Kelly about how we work together.

I think in general authors should think about their writing brand – and keep the things that aren’t part of that brand off their blogs, twitter, Facebook and websites.

It was kind of scary choosing something that would represent me but I feel having a unified look, and a distinctive cover, has really helped me. I don’t know if this helps to sell books in the short term but brand recognition can’t hurt. (Here’s an example, my lovely husband plastered an office building he works at with my book postcards…every bulletin board, every pigeon hold with a female staffer he stuck a postcard. I don’t know how many of those people have bought the book but he tells me when he mentions my book to people they say “Oh I’ve heard of that book.” It is working on some level.)

Q. Which brings us to the big ‘P’ – Promotion.  Or maybe Platform.  Writers hear a lot these days about putting themselves ‘out there’ and driving their own promotional bus.  How do you find the promotional part of your writing life?

Promotion is always such a hard thing to quantify (see part below about my day job). I do think you do have to do something. You need a presence. I did quite a lot of promotion with Mr Right and Other Mongrels. I put my book on a lot of sites, sought reviews etc. At the time there was a proliferation of indie sites that would host your book for free, most of which now charge, and some that tweet about your book as well. I joined some indie publisher forums and face book pages. Some of these things have led to sales and some haven’t. I did a book blog tour and I don’t think it  generated much interest honestly.

I blog on average four days a week. I took a week off and my book slid about 150,000 places down the Amazon ranking. Co-incidence? Maybe not. Facebook offered me some free advertising and I targeted people I would never come in contact with otherwise and got about 40 new likes to my Facebook page in a week. More sales? I don’t know.

Some of those things I might not have done with a traditional publisher such as the blog tour but mostly I think you have to anyway. I’m not that great at twitter but I’m there. I guess I’m doing something right because my followers continue to grow. I probably spend an hour to an hour a half a day on promotion – whether it’s doing my blog, writing a guest post, tweeting, Facebook updates. I think it’s a changing space and those changes give people lots of opportunities.

Q. Finally, I’m curious.  Do you have a ‘day job’?  If so, how do you manage getting enough time to write?  Would you like to write full-time, and if so, do you see that as a realistic possibility sometime soon?  If you don’t have a day job, do you offer consultancy on making your writing pay? 😉

I do indeed have a day job. I run a boutique PR consultancy with a friend. In essence I write for my day job as well. We started it last year and the funny thing is we only got busy bang on the time the first book was coming out.  We actually have been busier than we planned to be, which isn’t such a bad problem to have, the goal is to work 20 hours a week in my day job and 20 hours a week writing.  As a result  this last 6 months have been a bit of a steep learning curve for me in the juggling department. Still,  I don’t work full-time and have flexibility and we planned it that way.   I work from home a lot of the time so that means I can squeeze in bits of writing in between.

I find now that my daughter is older I have much more time to write so I don’t feel quite as anxious about it.  I learnt to write in half hour blocks when she was smaller and so I’m still good at snatching time away. What I am doing to make more time is shedding some of the other things I used to do (like hours of volunteering!) I’m a people person so I need to be with people to be happy so I can’t lock myself away in a dark room with a computer too much or I will end up beyond miserable and then I can’t write either.

I would like to write full-time down the track – that’s the goal – but I don’t think it’s realistic for me in the short term.

Well, I could keep this up all day, but you’ve got writing to do and so have I, so we’ll stop there!  Thanks so much, Monique for visiting my blog and answering all my nosy questions!

And if you have any more questions, feel free to ask in the comments and we’ll get answers!