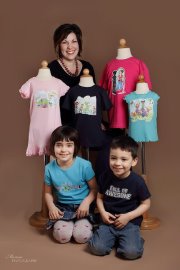 Several months ago, while tooling around and making a pest of myself on Facebook, I came across Pigtail Pals – Redefine Girly.

Pigtail Pals is a business. It sells clothes for girls (and boys) among other things.

But it is also much more than a business.  As it says on the ‘about’ page,

Not a little goal, then!  But such an important one.  For me, as an adult, ‘girly’ is an innocent word to describe fun and frivolous, enjoyable women’s stuff.  So, if I’m going out with a girlfriend to have a facial, or buy makeup or clothes, we might say we’re having ‘girly’ afternoon.  It’s harmless, for me.

But what effect does it have on a little girl, if ‘girly’  is all she is perceived to be – all she is ‘allowed’ to be? What if she absorbs the message that what, for me, is a frivolous and fun, but small, part of womanhood is ALL a girl is supposed to be or will be valued for?

This is the question Melissa Atkins Wardy, founder of Pigtail Pals found herself asking, when her daughter was nine months old.  The following quote is from the ‘Mission‘ page on the Pigtail Pals website and I think it puts it very well.

…I was in the middle of a conversation about Disney Princesses when I had an epiphany…Why in the world is my generation, the most educated, most well-traveled, most worldly generation of women ever…why are my contemporaries still raising our girls to wish upon a star in hopes that her prince may someday come? Why aren’t we teaching our girls to get into her rocket ship and find that star all on her own?And then it hit me — Maybe I didn’t need to raise my daughter in the pink & purple wave of brainwashing princesses and sexed up dolls I saw spiraling towards us. Maybe I could raise her to be smart, independent, strong and daring. Maybe I could incorporate every color of the rainbow into her world, and not limit her to pink. I recall watching her that morning, before she could even walk, making a promise to myself I would never limit her dreaming nor desire for adventure. I would help her redefine what it was to be a little girl growing up in today’s sometimes crazy world.

Anyone who has been around me for any length of time knows that I am very concerned about the hyper-sexualised world that our kids are growing up in.  The message, especially for girls, is that their entire worth is embodied in their bodies and specifically in how well they fit an artificial definition of sexiness.

Some people say, about this, that the solution is easy: just don’t buy or watch the things that bother you.

But it isn’t that easy.  Even if you never buy a magazine, and sell the TV, the images are everywhere, in shop windows and on billboards and movies.

And the stereotyped gender roles prevail in the toy stores and clothes shops to a level that almost beggars belief.  Walk into a Toys R Us and check out the ‘pink’ aisles some time, if you don’t believe me.  Or try to buy pants for an 11yr old girl that aren’t skin-tight.  Or a shirt for a boy that isn’t black or doesn’t have skulls or other violent images on it.

I’m not kidding.  This is what parents face every day.  Many of us are worried.  Melissa decided to do something about it.  Quoting, again, from the Facebook page,

Pigtail Pals – Redefine Girly offers empowering products for girls (and girls at heart) that encourage girls to be smart, daring, and adventurous. Created by a mom who believes our daughters need to SEE and GROW with images of girls in action and achievement.

Having products like these available is important.  We are visual and visceral beings.  Sure, we think about things, but an enormous amount of the way we experience the world comes through our senses.  What we see and hear is important.  What we wear is vital to our sense of self, and yet more so to the emerging sense of self of a child.  I, personally, don’t have anything against the Disney Princesses, but I would like to see more clothes options for little girls.  And I would really like never to see again a t-shirt in a child’s size 6 that says the wearer is ‘looking for a stud muffin’, or is ‘too expensive for you’ (both seen in KMart).

Having the conversation is also important.  To that end, Melissa has also set up a blog, which, in her words,

…aims to teach parents about the gender stereotypes and sexualization harming our children’s right to a childhood.

On the blog she is doing some excellent work in promoting positive body image and health messages for children and their families.  I know from personal experience how hurtful and damaging ignorant and judgmental attitudes can be for children who don’t fit the norm in any way and our current obsession with ‘the obesity epidemic’ is not helping.  In our increasingly secular world it seems that the horror and disgust people used to reserve for  the devil and sinners, they now apply to those who dare, for whatever reason to flout the new holiness – read, thinness.

I’m not suggesting that we go back to stoning sinners in the market place, but as a student of history, I can see some parallels with the public vilification of celebrities who dare to gain a pound or two.  Just sayin…

We desperately need to have a balanced, rational and caring discussion about how we can promote health in ourselves and our children without making them feel that they don’t measure up if they don’t fit some artificial ideal.  The work that Melissa is doing with Pigtail Pals is a wonderful contribution to that discussion and I think that for doing it, she is, to quote one of her t-shirts, ‘Full of Awesome’.

This weekend marks the third anniversary of Pigtail Pals and, in honour of the occasion, Melissa is hoping to make it to 10,000 ‘likes’ on the Facebook page by Sunday.  They’re nearly there, so if you feel like going over and clicking like, I’m sure it would be appreciated.  Tell ’em I sent you!  (If you want to click a like on my page while you’re there, I won’t complain ;))

And if you have any ideas or links to share on gender stereotypes and what we can do about them, or know of anyone else fighting the good fight who you would like me to cover here, please leave a comment!  I love to hear from you.

Thanks for reading and have a great weekend

16 thoughts on “Redefining Girly – One T-Shirt at a Time”