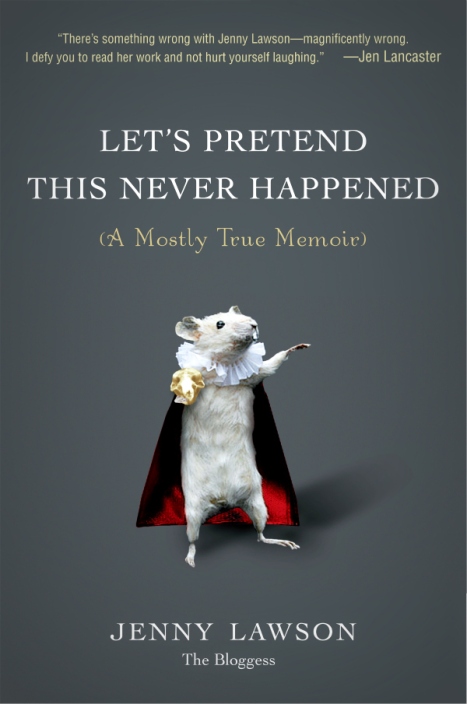 Imagine, if you will, a young girl, growing up poor.

Imagine that she has a chronic, undiagnosed anxiety disorder, a taxidermist father with a yen for roadkill and some very curious ideas about what makes a good puppet (and the time of night at which is appropriate to share said puppet).

Imagine she has a series of pets which… well, let’s just say that the pet experience is not entirely usual.

And all she wants is to fit in.

In the hands of Steven King, it would be a towering, terrifying horror story.  (At least, I imagine it would.  Growing up has not made me any more able to read Steven King’s novels than I was when I first encountered them as a squealy 11-year-old.  Loved ‘On Writing‘ though.)

In the hands of The Bloggess, though, it became Let’s Pretend This Never Happened: A Mostly True Memoir [which] is a poignantly disturbing, yet darkly hysterical tome for every intellectual misfit who thought they were the only ones to think the things that Lawson dares to say out loud. Like laughing at a funeral, this book is both irreverent and impossible to hold back once you get started.

Couldn’t have said it better myself.  No, seriously.  Why do you think I cut and pasted this from her book page?

I first encountered The Bloggess, when a friend sent me a link to this post about the advisability of chosing your battles.  I think I fell irrevocably in love over this one.  (Which I am aware probably says some very odd things about me.  Shut up.) Moving on…

Lawson’s long-suffering husband and sweet daughter are the perfect comedic foils to her absurdities, and help her to uncover the surprising discovery that the most terribly human moments-the ones we want to pretend never happened-are the very same moments that make us the people we are today.

I think I’m a little in love with her husband.  It really isn’t every man who will have the argument about whether Jesus should really be classed as a zombie in the car park of the local shopping centre.  Or put up with these kinds of shenanigans…

Take my advice and don’t read this book in a room where people are watching the TV.  They will give you dirty looks, as your attempts to suppress the sniggering degenerates into open snorting.

But do read it.  As Molly Meldrum used to say, back in the seventies (Australian music TV reference, never mind), Do Yourself A Favour.  Hie thee to your book purveyor of choice and get a copy.  Just don’t say I didn’t warn you!

The book page on her blog says that The Bloggess is considered to be one of the funniest women alive by at least three people.  Count me as one of the three.